Ancient Roman philosopher Marcus Tullius Cicero’s much-quoted line—“if you have a garden and a library, you have everything you need”—still rings as true in the twenty-first century as it did circa 43 B.C. But what happens if your particular plot is less-than dreamy? When designer and principal of Denver-based landscape design and construction firm Evoke, Ashley Stevens, was enlisted to upgrade this Boulder, Colorado-based family’s backyard, it wasn’t doing it for anybody. “They bought it for its potential for the backyard,” she says. “It’s probably a third of an acre—not huge, but for Boulder to have that level, private backyard, isn’t that common, which is why they were drawn to it.” The fact that it was all lawn, plus a teensy, tumbledown deck, called for a clean slate. “We started over and scraped everything!” says Stevens.

A crisp black-and-white color palette makes the greens of this garden even more lush. Hanging a rattan sconce over the outdoor dining table casts a warm glow that encourages guests to linger. No blow-up pool could ever compete with a stock tank.

Evoke is “known for creating modern, lush gardens . . . that allow for [the client’s] lifestyle and indoor-outdoor living experience,” says Stevens. In Colorado, an often water-strapped state, installing a flowing water fountain center stage imparts the feel of an oasis instantly. For this family, Evoke took the concept to the next level, designing one to look like a waterfall, and had it made from a custom-cut block of Colorado buff sandstone.

“When you’re in the space, it just feels so good because of that water feature—it’s a central element, and you have that sound of water between the two dining and outdoor lounge spaces and seating areas,” she says. “There’s not a lot of car or traffic noise, but the sound of water was important to them.” They chose to set the patio near the home itself because people like feeling protected, says Stevens. “The water feature anchors the space and you can hang out and listen to music and the kids can play in the lawn or explore the veggie beds and then you can eat and hang out.”

Another key factor to the success of this particular plot: shade, vital in a place that gets 300 days of sunshine a year. Here, they used a Sunbrella fabric that protects from rain and sun but also allows a bit of light to flow through, “so it feels really airy, not heavy,” says Stevens. “The backside of the house faces west, and it gets really hot in the afternoon and evening, so they wanted to have it feel covered and cool. These shade structures define the two spaces.” Evoke designed the structure to be built with six-by-eight inch steel tubes that could be fabricated on-site by a welder, and engineered it with minimal posts so it wouldn’t break up the patio; the shade itself can be put up each spring and tucked away during the chilly winter months.

As with interior design, it’s the little touches that bring this garden to another level of luxe. Take the patio, which is hewn of sand-exposed concrete that is then acid-washed to reveal sand and look “a little more refined,” she says. Or the raised garden beds, which are anything but standard issue, thanks to custom covers they made to complement the gables on their main house. “The homeowner was worried about squirrels and bunnies getting into her veggie garden, so we had those built and painted them black to match everything,” says Stevens. “They became their own feature—anybody who goes there says ‘those are so cool!’” Tucked behind netting that can easily be pulled back when it’s time to get your hands dirty: blueberries, herbs, tomatoes, and even an irrigation valve to make watering a breeze.

The homeowners loved the revamp, which came with a hidden upside: their pocketbooks got a little greener, too. “They ended up selling last year and it’s super important for people to know that when you invest in your yard, the value you [get back],” says Stevens. “They sold their house for probably half a million dollars more than asking because of the backyard.” Green for green.

how to live large alfresco

Light the Night. Exterior illumination is key for creating a warm, welcoming feel outdoors. Stevens suggests using low voltage LEDs in your pathway lighting, a sustainable choice that will go the distance without sucking up much power. And café lights twinkling across your living space is a must.

Highlight Greenery. The homeowner “liked that modern-farmhouse look,” says Stevens, “so we helped her select a white paint for the house and had trim painted black to add an element of contrast” that pops against the verdant garden.

Make Function Fabulous. “She had a ton of existing cedar fencing, and we used a Japanese technique called shou sugi ban (essentially, a blow torch that lightly chars the wood so it’s a black color),” says Stevens. Not only did they save money and materials they would have used building anew, but, the designer added, “We like the way the green looks against the black.” It’s as timeless as a tie and tuxedo.

Posted in Home Design Tips, In Their Element 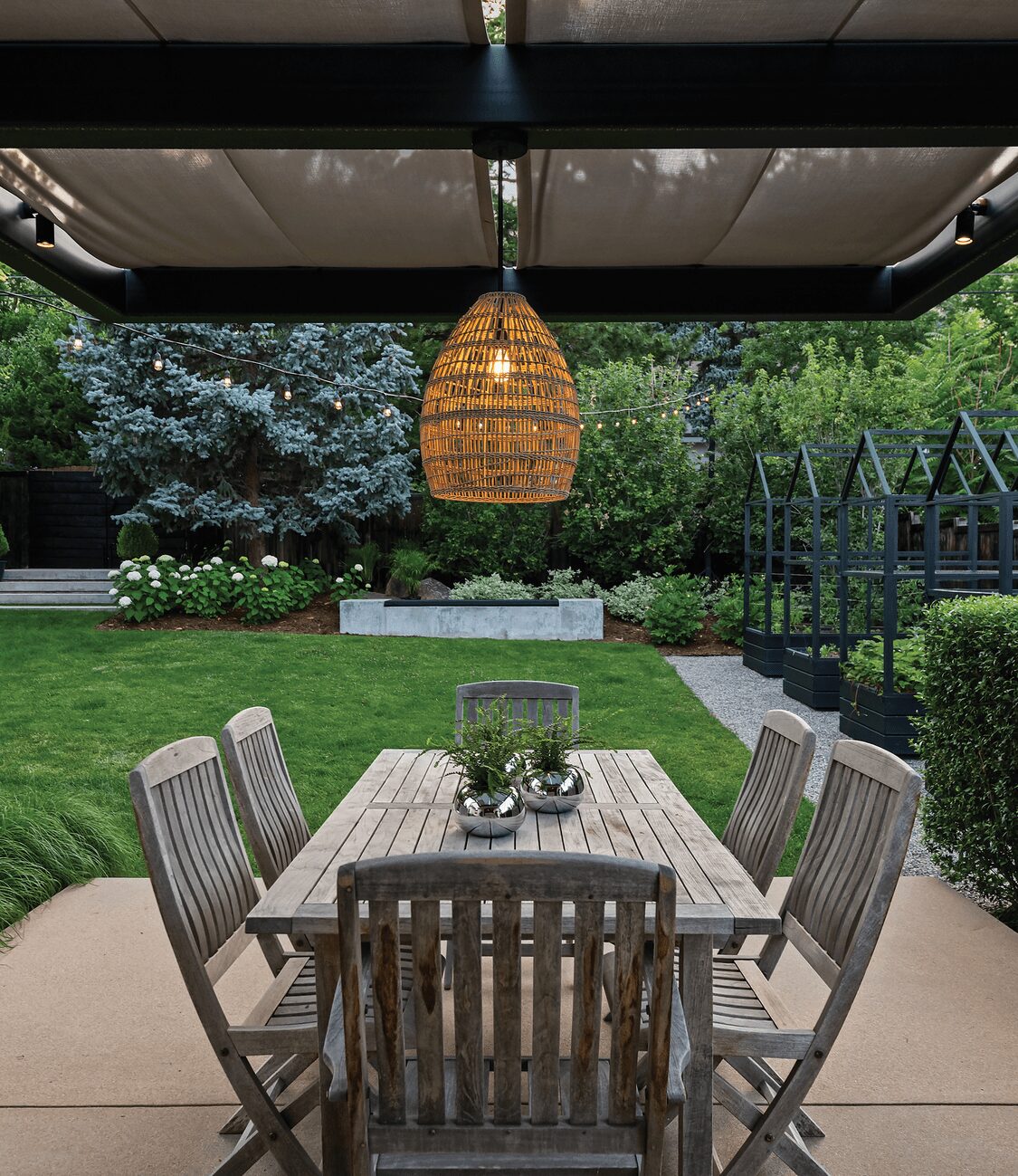