As air travel has slowed and road trips have surged, meandering scenic byways are bringing people back to sights off the beaten path. In northern Minnesota, Highway 61 along Lake Superior from Duluth to Grand Marais, offers a 110-mile road trip speckled with entrances to your choice of seven state parks. Alongside the rocky landscape of the North Shore you will be delighted with accessible waterfalls like Gooseberry Falls and powerful overlooks such as Split Rock Lighthouse and Palisade Head. For those looking to stretch their legs a bit more, there are hiking trails and camping opportunities at Tettegouche State Park or Cascade River State Park. For a bite en route, stop at Betty’s Pies and Lou’s Fish House, both located in quaint town of Two Harbors. The historic Aerial Lift Bridge in Canal Park, Duluth; the gateway to the Park Point Beach and the Port of Duluth-Superior. Lake Superior, the largest of the Great Lakes, was carved by the Wisconsin Glacier. After the glacier receded, Native American tribes—namely the Ojibwe tribe—settled the area. They called Lake Superior Gitche Gumee (which roughly translates to Big Sea), and established traditions that remain prevalent, like canoeing and cultivating wild rice. In the early seventeenth century, Europeans found their way to the North Shore, which spurred the fur trade between the Ojibwe and the French. The French influence can also be seen in area names such as Grand Marais and Voyageurs National Park.

In the late 1700s, there was an eager expansion into the Midwest and by the mid-1850s, Duluth became a permanent settlement with speculation of metal mining. Within a decade, Duluth was the fastest growing city in the Great Lakes, which led to the construction of a canal for its port and a railroad to the Twin Cities. Fast-forward to today: Duluth is the largest port city within the Great Lakes, shipping coal, iron ore, grain, limestone, and more.

Duluth’s industry is more than its exports—the city is a delightful lakeside destination to start your North Shore trip. There’s fun for all ages at Canal Park where you can visit the landmark restaurant Grandma’s Saloon and Grill, and witness the historic Aerial Lift Bridge (1905). This engineering feat allows both shipping freighters and yachts to enter and exit the port when lifted and car traffic to access the beach park (Park Point) when lowered. No trip to Canal Park is complete without walking or biking the Lakewalk. A favorite for locals and visitors alike on the boardwalk is a refueling stop at Fitger’s Brewhouse, one of the oldest craft breweries in Minnesota and listed on the National Register of Historic Places.

Highway 61 takes you to Grand Marais, just miles from the Canada border, and a great entry point to the Boundary Waters Canoe Area (BWCA). With over a million acres of untapped wilderness and countless pristine lakes, you can rent a canoe from one of many outfitters and paddle, leaving civilization behind you. The BWCA is part of the Superior National Forest where camping and fishing are permitted. If you are outdoorsy, you will appreciate listening to the sounds of loons, catching your own shore lunch or dinner, and tending to a campfire. Whether pre or post paddle in the BWCA, no visit to Grand Marais goes without provisioning. If you fancy a good Northwoods area icon, grab a pizza a Sven and Ole’s. For seafood lovers, you can’t go wrong with the Angry Trout Cafe. You betcha!

If you’re not keen on a road or canoe trip, you can experience a twenty-eight-mile portion of this same route via the North Shore Scenic Railroad. The various niche-themed rides start at the depot in Duluth and head toward Two Harbors. Sit back, relax, and enjoy vistas of Lake Superior’s dramatic coastline. You will understand why the Ojibwe called it Big Sea.

This year, get your dose of the outdoors with a road trip or train ride filled with rustic beauty, history, and delicious foodie finds. All aboard. Next stop—Duluth, Minnesota! Get in touch with nature on a canoe. The rugged yet beautiful coastline of Lake Superior. 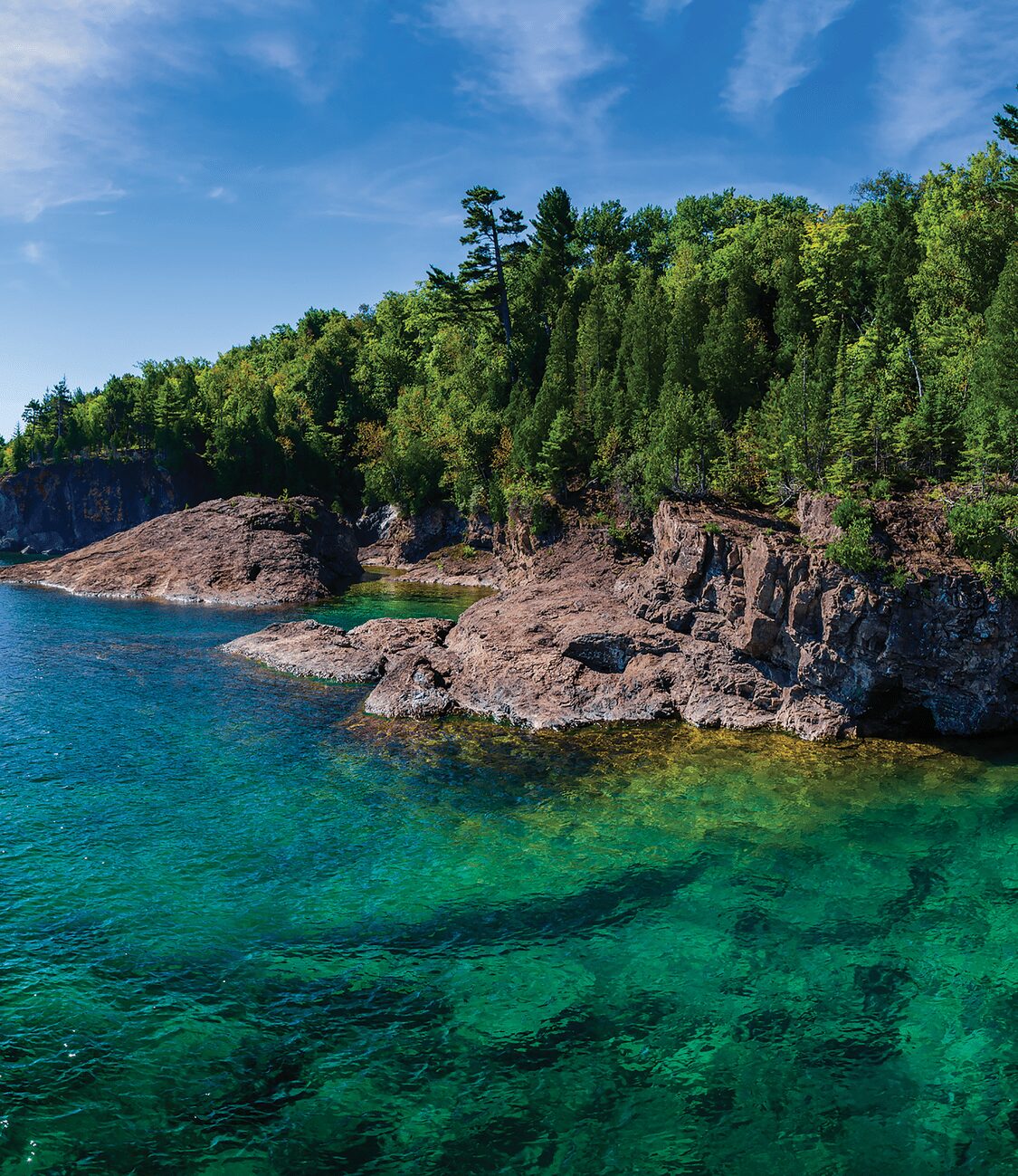