Famously home to laborers and the wealthy alike, the historic tenements of Edinburgh offer creative opportunities for their modern inhabitants. When interior designer Cathy Dean purchased this former student housing unit in the Stockbridge neighborhood, she was immediately inspired. Designer Cathy Dean describes her style as “relaxed glamour.” In this Edinburgh apartment, she balanced bold colors with inviting textures for elegant comfort. In the kitchen, the designer took pains to retain the room’s original proportions and molding, even when removing a wall where the set of pendant lights now hang. Whenever possible, Dean and her team restore instead of replace. “The mantra of our studio is that what’s old is old and what’s new is new,” she says.

“There are so many apartments like this that I wanted to make it stand out,” says Dean. “I wanted it to be opulent and distinctive and a little bit crazy.”

The designer and her husband were looking for a second home in the city that could double as an Airbnb when not being enjoyed by their family. With a dual purpose in mind and no client to consult, Dean found herself in a unique—but welcome—situation.

“From my perspective as a designer, it was the perfect opportunity to just absolutely let go,” says Dean. “I approached the design far more in terms of . . . someone looking to stay in Edinburgh. What would make you want to stay here and not somewhere else? It [meant] that I could go really dark, really sumptuous, really interesting.”

Dean often finds herself drawn to black, and with the free creative rein offered by this project, she opted for an entirely rich, dark palette. The designer used Benjamin Moore’s Black Tar for inky luxury in the living room, kitchen, and even some of the ceilings. Jewel-toned reds and blues add contrast, while metallic finishes like the brass peacock door handles provide depth and a reminiscence of bygone glamour.

“I like to push myself from a design perspective and pulling the reds in, I felt like it was nodding back to the opulence of these buildings, but it was doing it in a super modern way,” notes Dean. “Part of me as a designer wanted to show that this red, well this kind of Bordeaux color used in a way that was . . . a bit quirky, could be really stylish. It didn’t need to be garish and overwhelming. You can use these colors, materials, and textures in a really interesting way.”

Finishes and textiles ultimately played a large role. “A huge amount of our work involves some things that will have a sheen and some things that will be really natural,” says the designer. “Using linens with velvet is almost like dressing it down. It allows the opulence to feel more approachable, so you don’t walk in and feel it’s stuffy.”

As a nod to the apartment’s history, Dean and her team kept as many of the original features as possible. Even when converting the former two-bedroom, one-bath into a three-bedroom, two-bath unit, preservation of the architectural charm and proportions was paramount. In the living room, for example, the designer restored the original fireplace and turned the existing Edinburgh press into a bar cupboard.

“The apartment has ceilings that are three and a half meters [eleven and a half feet] high, so it can take dark,” explains Dean. “There’s still this sort of, I think, misconceived idea that you need to paint it white to make it light and airy. And that was something that I absolutely wanted to push against. With ceilings that high, with humongous windows, it actually feels quite wonderful.”

Spatial planning was key to the harmony of this design. To balance the decadence of the color palette, Dean and her team kept the layout informal and relaxed. Instead of matching cushions or furniture, rooms feature cozy layering and custom art to fit the apartment’s proportions. Dean commissioned several of her favorite works from friends, including the commanding piece above the fireplace and fashion prints in the master bedroom. Hints of bold colors found throughout the apartment peek through the prints in the ladies’ eyeshadow, lipstick, and attire.

For accent color inspiration, the designer frequently pulled from the splashy wallpaper featured in the living room and bedrooms. Instead of opting for just the more traditional pinks in the mural print found in the master bedroom (Ava Marika from Woodchip & Magnolia), Dean incorporated its mustardy golds and dusky blues into the furniture and bedding.

“I wanted it to be the most amazing master bedroom and there’s something glorious about being able to lie in your bed and look at wallpaper,” says Dean. “I think we forget about ceilings all the time. The fifth wall shouldn’t be forgotten!”

The beetle print found in the children’s room—a decision the designer credits to her young daughter—introduced a host of vibrant hues for the designer to play with on the walls, cushions, and even bedside nooks. It was important to create a space that Airbnb guests could appreciate that also felt personalized to her children. Dean even used color-blocking on the stairs leading up to the top bunk; each step opens to reveal a storage compartment for toys and stuffed animals.

The result of all these unexpected details and careful finishes? A decadence that feels lived-in and accessible.

“This is Edinburgh, so it’s not like we get glorious California sunshine,” jokes Dean. “It’s gray and windy and wet, and I wanted something that you could walk into and feel like [the apartment] was almost giving you a hug. I wanted the whole place snuggling you in and feeling really homey.” “I wanted it to be opulent and distinctive and a little bit crazy.” To balance the rich hues, the designer played with pattern and cheerful accent colors—showcased clearly in the bedrooms. In the second bedroom, Dean used a gold, fabric-backed vinyl wallcovering from Tektura to add depth without overwhelming shine. 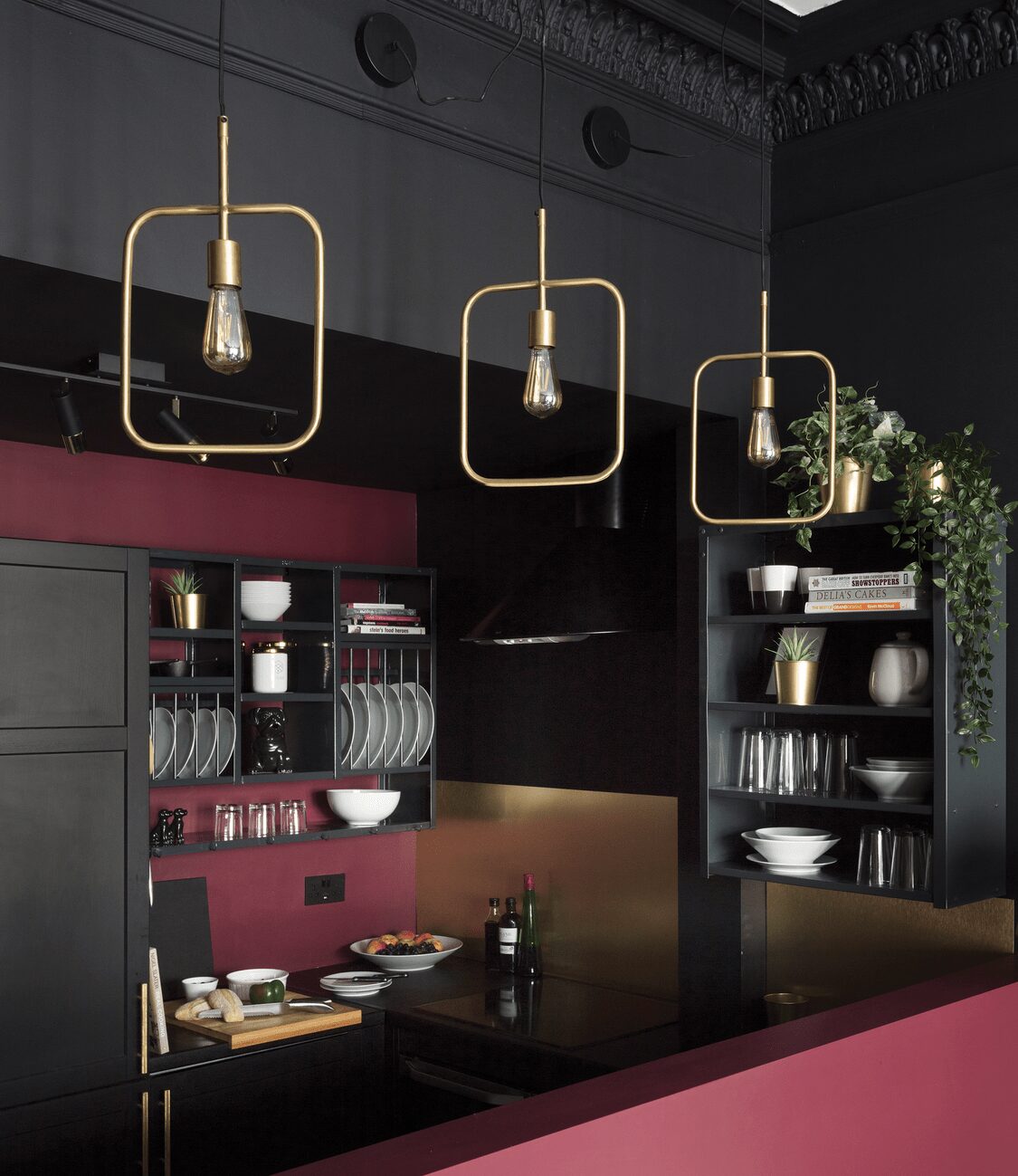