A FLORIDA PROPERTY GOES FROM OVERGROWN TO OUTSTANDING

When landscape architect Craig Reynolds first sees a project, one of three things runs through his mind. “Sometimes it’s a project that I can see the vision immediately and I need to get it down on paper right away,” says Reynolds. “Or, there are others where there are other fixed elements that I have to connect to make it work. And, finally, there are some projects where it’s a complete overhaul and we have to start from scratch.” This particular project he was tasked with designing in the Florida Keys, fell somewhere in the middle. There was a disconnect between landscape elements and water views and, hence, desperately needed redesigning and reimagining. Landscape architect Craig Reynolds designed this Middle Keys waterfront property similar to a meandering secret garden. The front of the unassuming home leads to the backyard via coral and oolite steppingstones. Reynolds utilized stone to create a natural-looking frame to the pool.

Though the 10,000-square-foot lot in Sugarloaf, Florida was small, it’s nothing Key West-based Reynolds hasn’t worked on before. “All of the homes in the Keys have these tiny backyards,” he says. “They’re all very unassuming from the front and you never know what’s behind those gates.” This home was just that: a tiny pink cottage with overgrown foliage and a jewel box of a backyard that simply needed updating. Just steps into the backyard and Reynolds could instantly see the potential. Though it was terribly overgrown with a mishmash of plants, trees, and florals, beyond the grassy yard was a stunning but hidden bay view. “It was just a really overgrown, meandering property with no clear vision,” he explains. “The previous homeowners wanted a barrier between the water and backyard because they didn’t want to feel the wind. But in creating that massive hedge, they also blocked this stunning water view.”

The homeowners knew they needed Reynolds’s expertise to bring the backyard to life. Having traveled frequently to the Caribbean, the couple was smitten with British Colonial design. The aesthetic stems from the architecture and interior design from the eighteenth and nineteenth centuries in the British Caribbean, most notably in Bermuda, Barbados, Antigua, St. Kitts, and Nevis. For Reynolds, so much of his work goes beyond the layout of the property and so much goes into the material choices to achieve a certain look. “When they first mentioned British Colonial design to me, I immediately thought of coral and oollite [a type of sedimentary rock, usually limestone],” he says. “I also like to use natural stone as much as possible versus porcelain tile so it all feels handmade. But I didn’t want it to be too perfect. It’s hand-done but has this nice aged look to it.”

Reynolds used the coral and oolite throughout the property including the pool deck and stepping stones with patches of Zoysia grass in between leading up to the water. On the stone benches and pool, the designer sourced slate from Thorntree Slate in Texas to give it “a warm, natural feel,” he says. “It was really fun to use all of these different materials to pull together this soft, natural, tropical look.”

The design was just as much about the plantings as it was about the hardscape. The overgrown property was one of the biggest hurdles for Reynolds to overcome with this project. “It’s what I call a tossed salad garden,” laughs Reynolds. “There’s one of everything. The previous homeowner loved plants so much she put one of everything in. But when it comes to designing gardens, I really try to avoid that because I want the look to be cohesive and consistent. And because the homeowners wanted this to be a soothing, tropical retreat, having that consistency was important in creating that feeling.”

The designer turned to what he calls the 70-20-10 theory. “Ten percent of this design are the accent palms and the other 20 and 70 percent are the larger palms and florals to create that relaxing retreat feeling in the garden.” Reynolds opened up the water view and then created a perimeter barrier using bougainvillea throughout, layered with a variety of palms such as old man palms, buccaneer palms, and hurricane palms. “I’ll never just throw one of something into the landscape,” he explains. “I’ll always add four or five of one plant. When it comes to shrubs, ground covers, and other plantings, that’s where I use multiples so your eye drifts along all of it and it’s visually appealing.” One exception was his addition of the oil palm, “a really dramatic palm that you put in one of because it’s almost like a sculpture. It’s an impressive piece of botany.”

The meandering, tropical retreat that Reynolds set out to create was a success after eighteen months. “For these clients, it was about less house and more garden,” he explains. “It’s an incredibly lush tropical garden in the Keys behind a very basic hedge. It ended up being a really beautiful property.” 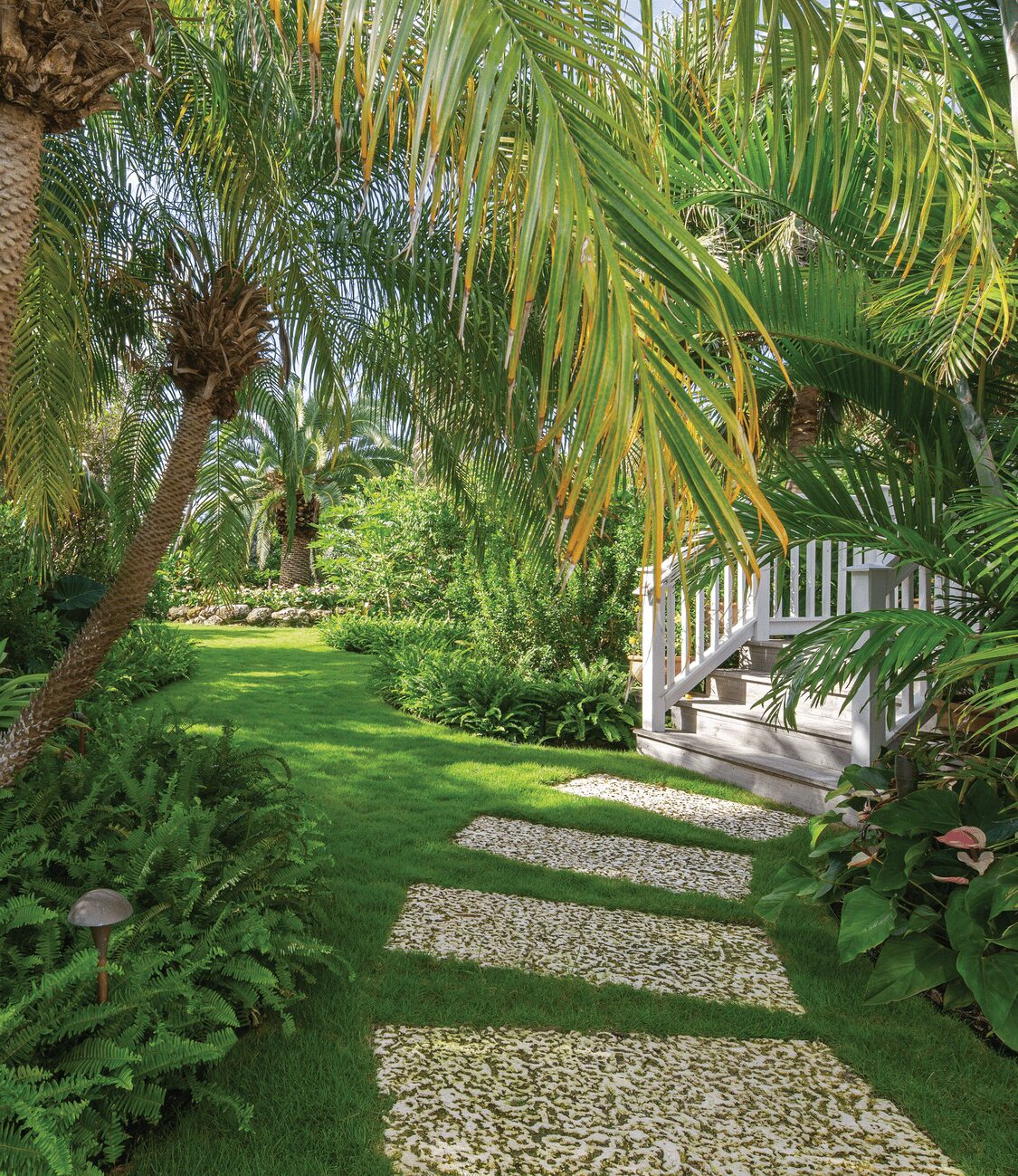